Heading into my sophomore season of senior racing I was optimistic and eager to see what the new season would bring. After finding success in my 2017 rookie season, coming away with several podium finishes, and accomplishing 5th place in the Eastern Canadian Karting Championship, I had several goals for 2018. Reflecting on my strengths and weaknesses, my targets were to improve my qualifying results in events, enhance my driving consistency, and finally win a ticket to complete in the Rotax MAX Grand Finals, one of the most prestigious world final events. In order to maximize my chances of winning a ticket to the Rotax Grand Finals, my team and I decided to compete in all the North American Rotax events.

The first event we decided to take part in was the first round Western Canadian Karting Championship, in Strathmore, Alberta. The verdict was if I found success in the first round, I would continue next two rounds of the championship. In order to be prepared for the race we came the weekend prior to the event to practice and set up the go kart. The testing was 3 days longs from Friday to Sunday, then I would take a break the next 3 days before the event weekend. When I arrived at the track, I picked up the tracked easily, unfortunately I found some issues with consistency which carried over to the race weekend. When the weekend arrived, I was all rested and ready to prove myself. Regrettably things didn’t plan out how I was hoping. After a rough qualifying run on both days, I struggled to find my way through the midfield, getting caught up in on track incidents and continuing to struggle with consistency, as result finishing well down the order. Even after the disappointments of the weekend I had gained valuable knowledge and experience to build future success in my season.

Going into my second major event of the season, The Rotax MAX US Open at the New Jersey Motorsports Park I had a lot of confidence following two very successful regional races in Ontario. Because this was the second time in a row I had visited the track for the same event, I was ready to show that I had improved and was a force to be reckoned with. The weekend started well with me out performing my teammates, but I still needed a little bit extra to get to the top of the grid. Luckily Friday brought me that opportunity, with me getting 3rd fasted in free practice and a respectable 9th in qualifying. This success gave me the opportunity to perform well in the heat races to place high in the prefinal. Unfortunately, after a rough prefinal I was forced to start from 9th again in the final. However, I didn’t let this misstep slow my momentum. In the final, I had a good start getting myself  to 4th, and then to 5th. As the race continued me and the other top 5 drivers had separated from the rest of the pack. This however was a not a happily ever after ending, ¾ into the race I was hit by the kart behind and sent to the back, ending my chances of a top 5 finish. Although my race ended with disappointment, I felt I had proved my point. I showed how I could run at the top end of the grid and my showed future potential.

Sadly, this streak of bad luck followed me going into my final major event of the year, with accidents in the two regionals races leading up to the Canadian Open. Nonetheless this did not waver my confidence, I was ready for what Mont Tremblant had to offer. Going into the weekend I had an average week, with some good results, however the week was mainly used for qualifying testing, so ups and downs were to be expected. Regrettably, qualifying did not go well, this forced me to start at the back for the following heat races. Luckily, I’ve had experience fighting to the front, so I thought I could make up the time. This however did not plan out either, as I got caught up in accidents in all the heat races. By the time It was the final, I was starting in 14th position, it was a tall order to come away with a top 5 finish. Despite all the weeks disappointments, my confidence had a boost on Sunday. The reason for this was that before the final the heavens opened up and it started pouring with rain. As I’ve had an incredible track record of rain racing, I knew this was my opportunity to redeem myself. This came to be true, and I managed to make up a whopping 10 positions in the final to come away with an incredible 4th place finish!

After such a roller coaster of a season it was awesome to end it on a high note with the Canadian Open. The 2018 season included some incredible racing for me, as well as introduced me to some brand-new tracks. This overall really helped me further to develop my skills as a racing driver. I plan for nothing but to capitalize on my success for the 2019 season to win a ticket to the Grand Finals, and hopefully get into a race car soon. 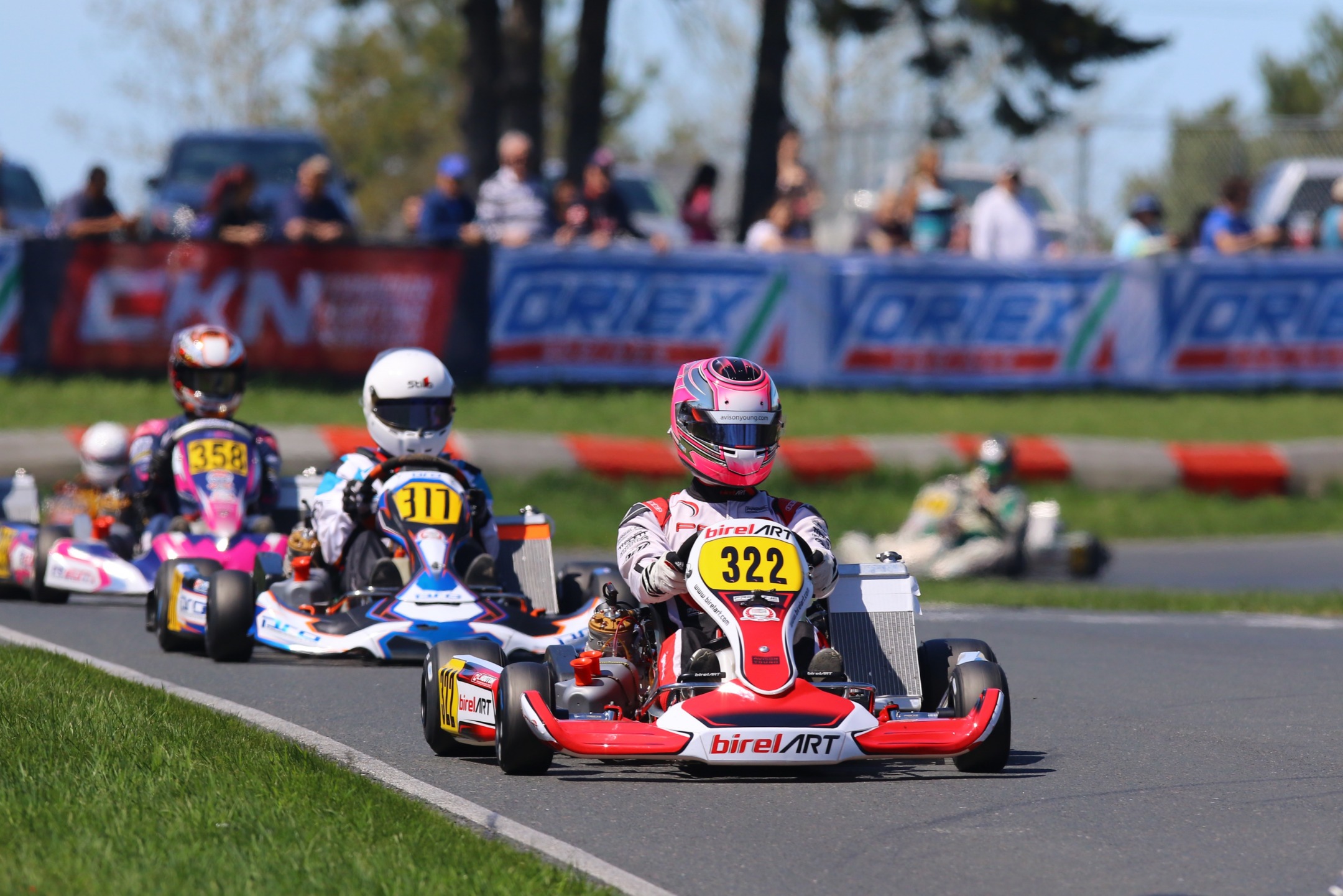